Looking for a challenging action-packed fighting game? Why not give the Electric Man 1 flash game a shot? It is a fairly good game that is highly dedicated to its genre and will give you a chance to have fun by smashing your opponents into the ground and flinging them into the air. Out of all the fighting games out there it is hard to pick the best one, but certainly electric man holds a spot in the upper half of the list and if you decide to give it a shot you will see why for yourself. But what is so special about it? 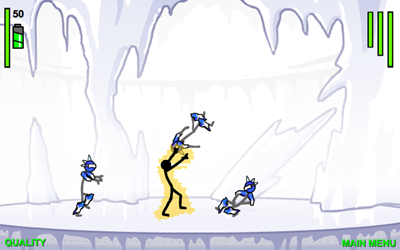 People seem to expect some unseen features from this game to justify its high popularity, but the truth is that it has earned its fame thanks to its simplicity rather than a series of complex features. There are no special RPG elements and the plot line doesn’t really exist and you know where little about the world you are playing in and why you are even fighting all those other stickmen.

The gameplay is based around simply fighting your opponents by using basic, modified and advanced fighting moves that your character can perform. You control his movement with the arrow key and dodge by tumbling to the side with the down arrow key. The basic moves are performed with the A, S and D keys, while the advanced moves are done via Q, W and E keyboard keys. The basic three attacks are punches, kicks and grabs but they all have a series of modified moves that depend on other factors, yet are activated with the same button.

For example, if you are standing still, using the D key on a target will cause your character to grab the enemy and knee kick them, throwing them away. But the modified version of the attack is much superior. While running, hold the D key and you will jump on your target, grab them by the neck and fling them to their doom! There are of course a few more interesting combination that you can try out, but it is best you check this out for yourself by playing Electric Man 1.

So who will you be fighting? There are a lot of different opponents in the game for you to battle against and you will have to beat each of them in order to progress to the next round. As such you can expect to battle against “the Toxic” and “the Frozen” to name but a few of the different enemies that you will encounter.

As mentioned previously, there is not a lot you can do other than fight your way through the different rounds of the tournament. Your ability to customize the character is also very limited as you will only be able to change his name and some of the physical attributes at the start of the game. Other than that the game features some solid graphics and cool soundtrack that will get your blood boiling for battle! Electric Man 1 is certainly worthy of its popularity and I recommend you play it if you are a fan of fighting games.